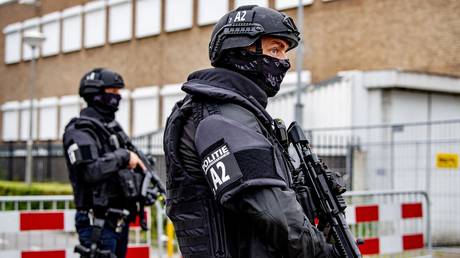 A hostage situation is reportedly unfolding at an Apple Store in Amsterdam, with police closing off the nearby area and positioning armed officers outside. One local media outlet said eyewitnesses had reported hearing gunshots at the scene.

Footage shared on social media shows a large police presence in the area, with the surrounding streets apparently devoid of pedestrians. Some of the videos posted show a gunman inside the store gesturing while holding onto a possible hostage.

One clip, apparently filmed from a café across the street, shows a man in a dark hoodie holding a second individual by the neck with one hand and waving around a gun with the other. Police are shown in another video running to the scene to join officers already positioned across from the Apple Store, some with their weapons drawn.

“Due to a report at a shop on Leidseplein, police are now deployed there,” the city’s law enforcement agency said in a statement on Twitter. In a later update, it said specialist units were being brought in to help “get the situation under control.”

The store in question is in central Amsterdam’s Leidseplein – usually a busy hub of nightlife and entertainment. Police were called to the square at around 5.40pm local time to attend what was reported to be an armed robbery in progress.

According to Dutch outlet, Het Parool, the incident began when two masked men tried to leave the store. On seeing police nearby, they reportedly grabbed a bystander and went back into the Apple shop, taking the man inside as a hostage. Officers have since evacuated buildings close to the Apple Store, while visitors to cafes in the area have reportedly been told to stay away from the windows.

Stabbing in Norway leaves 3 injured, one in critical condition